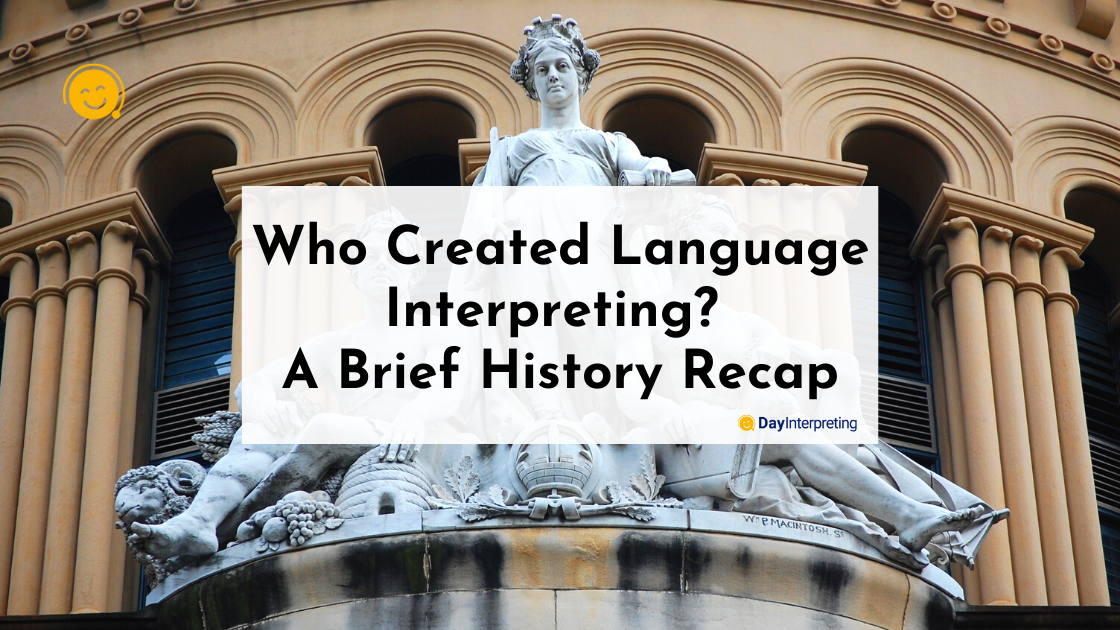 Communication has always been central to human evolution. But do you know who created language interpreting?

From what we know today, the ancient interactions between different peoples, tribes, and cultures would define the need for language interpretation as essential.

In today’s post, we’ll do a brief history lesson to find out who created language interpreting and why it became vital for human communication.

Conquering Led to the Rise in the Need for Language Interpretation

The urge to conquer lands gave men power. And to impose their presence on the invaded region, the dominant leader would spread their language.

Naturally, they needed interpretation services from locals to help them achieve this. But language interpretation goes back to the times of the Egyptians.

Language interpretation dates to Ancient Egypt during the 3rdmillenium B.C., where the first records of interpreting came from a prince’s tomb. Here, they made references to an interpreter supervisor.

When gestures alone weren’t cutting it for ancient civilizations, official interpreters started appearing on the scene as the business evolved and communication was sharpened up. This continued throughout the Middle Ages but language interpretation evolved over time.

There were also many formal and informal references to sign language interpretation. You can find these in the history books detailing proceedings of important events in the Soviet Union, Aztec Empire, and Roman Empires.

During his first voyage, Christopher Columbus mentioned how his Arabic and Hebrew interpreters weren’t helpful for communicating with the Indians. This is why he captured Native Americans, taught them Spanish, and used them as interpreters on his following expeditions.

Was it the Tower of Babel that Created Language Interpreting?

You’ve probably heard the story of King Nimrod, that wanted to build a tower with a top spanning into the heavens. God punished the desire for power and greatness by confusing the speech of the workers that initially all spoke the same language.

After this incident, the people couldn’t understand each other anymore and subsequently stopped building the tower.

This narrative highlights the importance of communication. And it’s also where interpreting comes into play. It’s already hard to accept someone else’s view even if you speak the same language. Miscommunications are human errors.

So just imagine how hard it is to communicate with someone that speaks a foreign language.

Although we can find many examples of two or more civilizations interacting with each other throughout history, there is always a shared connection.

By the end of World War II, interpreting was on the rise. It was the Nuremberg war crime trials that marked the formal introduction of simultaneous interpretation. And since then, it has been used in nearly every important conference and event since then.

In fact, conference interpreting was shaped by the events of the trials. When the trial ended in 1947, the United Nations established simultaneous interpretation as a permanent service.

Without simultaneous interpreting, it would have taken twice as long to work with the four languages (English, German, Russian, and French) present.

Twelve interpreters could sit at four desks separated by glass panels. Each was equipped with headphones to follow the proceedings.

There was no such thing as ‘model interpreter’ at the Nuremberg trails.

Every target language consecutive interpretation specialist came from a different walk of life. Some were teachers, others were professional medical interpreters, yet these linguists delivered impeccable services.

Having seen simultaneous translation and interpreting in action and how the interpreters performed, the United Nations recruited some of the speech interpreters of the trails to work for the U.N permanently. These interpreters continued to convey messages using consecutive interpretation to translate many languages.

Healthcare and the Rise of Qualified Medical Interpreters

Healthcare is an industry that has grown to over 1 billion. Millions of patients need medical assistance every year because the medical services they provide lack English language proficiency, which requires medical interpreters. Decades ago, LEP patient often had difficulty getting medical services in their native languages. Some hospitals sought advice from relatives unfamiliar with medical terms for the patient or did nothing in any language. In 1974 the Federal government began to require healthcare organizations to provide language services to patients in need of such help if they are not able to speak English.

Modern Interpretation Solutions in Every Style

Day Interpreting understands that communication is very important. From medical interpreters to conference language professionals, language specialists are essential in various aspects that allow us to communicate.

We’ll help you communicate and break through the language barrier with our range of professional interpreting services and experienced human translators. We offer in-person, telephone, and remote interpreting solutions in hundreds of foreign languages throughout the world. We’ve got you covered for any and every target language. We’re here to help you with multilingual meetings and events.

To learn more about our interpreting services, contact us today.