How Interpreters Work in Times of War 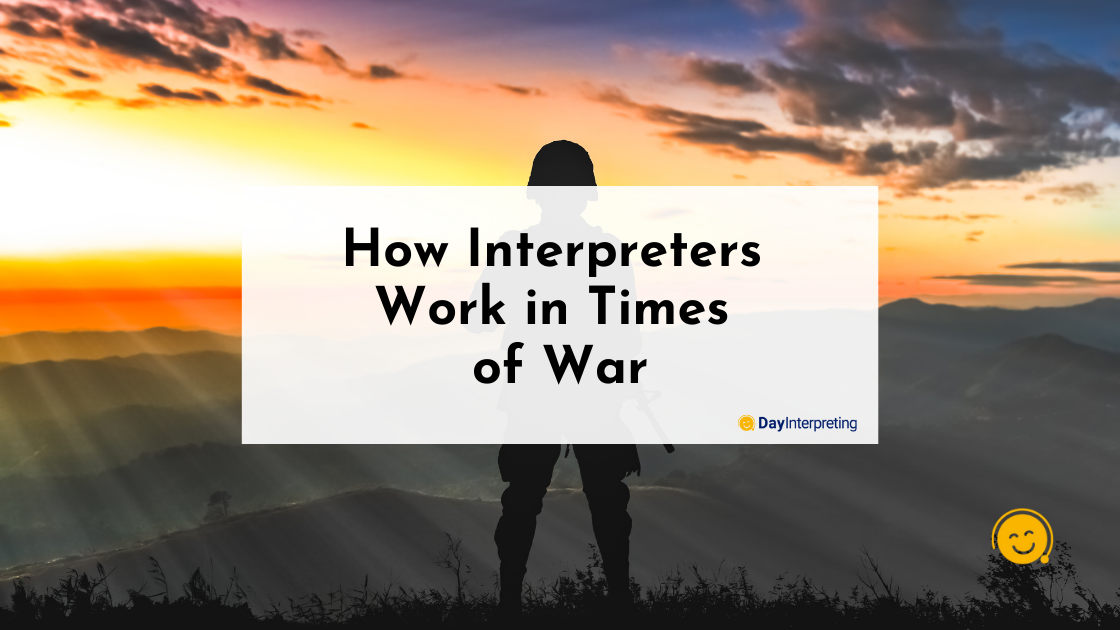 Do you know how interpreters work in times of war? Serving as a linguist in conflict zones is a superb career choice. Working in high-risk environments, and facilitating interactions while being vulnerable to attacks is no easy feat. Interpreters working in times of war place their lives at risk. But they do it all for the sake of trying to preserve the peace.

In this article, we’ll look at how interpreters assist as language bridges transcending conflict. We also give thanks to the unsung heroes of war!

How Interpreters Work in Times of War

Whenever we refer to a ‘conflict zone,’ it refers to a war zone that usually spans across borders. This is why it’s important to establish clear communication across a multilingual and multicultural environment.

The majority of interpreters and translators that work in times of war are contracted by the Army, the UN peacekeeping forces, foreign affairs ministries, humanitarian NGOs, and journalists.

In order to make it in this role, interpreters need a lot of courage, sensitivity, and sensibility to spend their days helping people communicate. According to the US Army, interpreters act as helpers and weapons, whereas only having weapons leaves you with just weapons and not helpers.

A local interpreter with cultural familiarity can identify a suicide bomber from his suspicious behavior even before a military unit can trace him. A translator acting as a liaison between the Army and the local police can help translate orders and timetables.

There are many cases where having an interpreter on the Army’s side saved them from landmines and dangerous paths.

Translators and interpreters make meaningful contributions in conflict zones by also working with journalists, doctors, NGOs, etc. It’s essential for professionals and aid workers to communicate to the locals, using interpreters who can ensure that the message is conveyed effectively.

What Challenges Do Interpreters Face in Conflict Zones?

In rare events, interpreters are even hired as tools by organizations working to distort messages. Naturally, this quickly leads to intentional mistranslation and misinterpretation.

Just like ethical journalist practices, the interpreter must strive to always translate spoken communication without misusing the power of their roles. Unlike journalism, where personal views are allowed to an extent, there is no room for distorted communication in interpretation.

Interpreters represent the voices of those for whom they perform the interpretation. But in conflict zones, these lines can easily become blurry. More often than not, local populations tend to view interpreters as soldiers or at least as being on the same team as the soldiers.

Imagine a soldier trying to communicate with a civilian or refugee through the assistance of an interpreter. It can be challenging for the interpreter to render the soldier’s message without appearing to work with or for the Army.

This is why locals tend to treat interpreters as enemies. The Afghani interpreters, who assisted the US Army in Afghanistan, for example, were treated as traitors and hunted down after their duties ended.

There are many organizations out there fighting for better laws to protect interpreters and translators in conflict zones. There has been a massive push for a UN resolution similar to the one for journalists. This resolution will grant linguists specific protection under international law.

In a perfect world, these lesser-known war heroes are all offered honor and protection. Linguists in conflict zones should be free to work without fear of prosecution or biased judgment.

Here are Day Interpreting and Day Translations, we’re rooting for interpreters working in conflict zones. We believe that everyone needs access to language. Even more so during times of uncertainty!