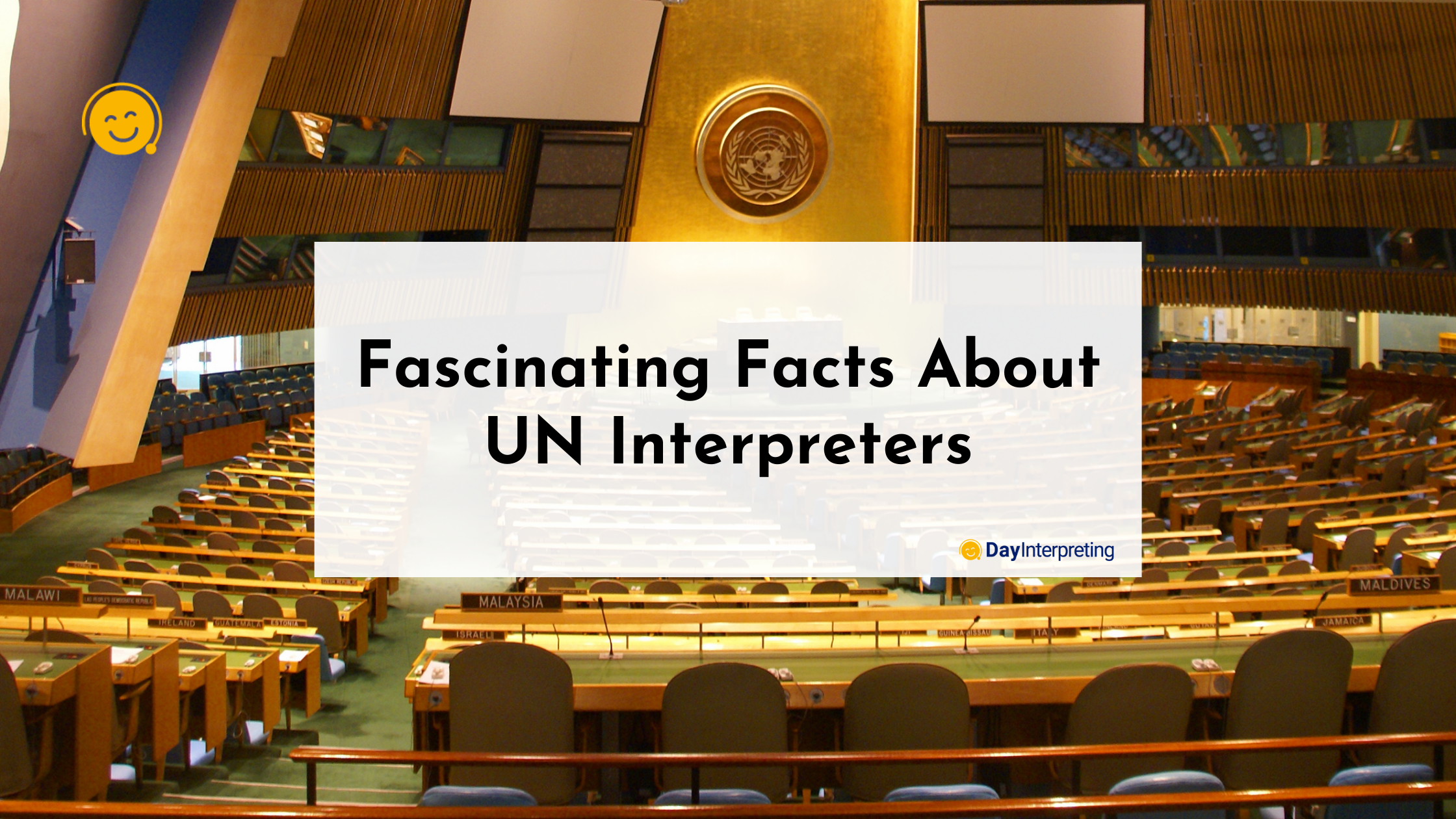 Acting as the invisible smashers language barriers, UN interpreters have the opportunity to experience history in the making. With seemingly perfect jobs, these language experts travel worldwide to work with some of the world’s top leaders during conferences and meetings.

But with the weight of the world resting on their interpreting skills, interpreters that work for the United Nations have an enormous responsibility on their hands. Being lovers of all things language and interpretation, Day Interpreting thought it would be fun to share some lesser-known facts about the roles that UN interpreters play in countering culture and language barriers on a global level!

Did You Know that the United Nations has 6 Official Languages?

It’s true! English, Spanish, French, Russian, Chinese, and Arabic are the official languages of the UN. This means that all official documents are published in all six languages, even though the Secretariat staff tend to stick to English and French as their primary languages for internal communication.

Back in 1946, English and French were the only two working languages of the UN. Today, messages from the UN are delivered in one of the six official languages, leaving the job of interpreting into the other five languages in the capable hands of highly-trained and experienced interpreters.

If You Want to Work for the UN, You Must Speak At Least Three Languages

If you’re keen on joining the forces of the United Nations Interpretation Service, you’ll need to demonstrate your expertise in two of the UN’s official languages in addition to your native language. You must also have in-depth knowledge of a wide range of interpreting subjects.

Most UN meetings are centered around politics, human rights, economic and social matters, finance, and legal affairs. This means that UN interpreters must have experience interpreting in these fields to get their foot in the door. To ensure they stay up to date with developments and global events, UN interpreters are constantly studying and expanding their skill set to stay on top of their game.

They Do Simultaneous Interpreting

The UN uses simultaneous interpreting during meetings, which means interpreters must listen and speak simultaneously. Most of the time, interpreters work from within soundproof booths. They listen to the speech through headphones and interpret it over a microphone. This means UN interpreters are constantly juggling three tasks at once: listening, translating, and talking.

To accumulate the skills required to perform accurate interpretations, UN interpreters undergo years of professional training. Any candidate looking to take the UN Competitive Examination for Interpreters must have at least 200 hours of experience in the language service industry working as either an editor, conference interpreter, or translator.

Interpreters for the UN Interpret into Their Native Language

For the best quality interpretation, interpreters must always translate into their mother tongue. But for Arabic and Chinese interpreting, interpreters are often tasked with interpreting into English or French too, since there aren’t many native qualified interpreters.

In any regard, an interpreter for the UN must deeply comprehend their two source languages. And since many speakers at the UN use the UN’s official languages as their second or third language, interpreting can be a challenge.

The Film Industry Loves the Work of Interpreters

The latter pointed out just how demanding an interpreter’s job really is and how the slightest mistake can change the course of a conversation. Yet, despite the light that films and various publications shine on interpreting, there’s still a lot the public isn’t aware of. These language professionals must always remain objective during discussions and tend to work under some of the most stressful situations out there.

Interpreters are professional language services providers, and they are always expected to deliver the best quality work, even when the environment is very stressful. But interpreters are the experts that help bring nations together. In fact, the UN recognized the importance of interpreters and translators and coined September 30th as International Translations Day!